East Parish Burying Ground, also known as Centre Street Cemetery, is an historic cemetery located at Centre and Cotton streets, Newton MA. On December 23, 1983, it was listed on the National Register of Historic Places (Site – #83004010).

The Cemetery dates from the 1660s when the term parish had both a political and religious connotation. The East Parish Burying Ground was associated with

the First Church in Newton organized in 1664, which celebrated its 300th anniversary in 1964, but was dissolved in 1973. The First Church’s last church building was located at 1115 Centre Street, Newton, MA. The Cemetery is owned and operated by the City of Newton.

Francis Jackson in his 1854 book details some History

Page 71: “About the time of the setting up of the first Meeting-house, [1660,] Deacon John Jackson gave one acre of land for the place for the house to stand on, and for a burying place; and May 14, 1701, Abraham Jackson [son of Deacon John] added and gave, for the setting of the school house upon, the enlarging of the burying place, and the convenience of the training place, one acre more, which said two acres was then laid out and bounded,…..”

Page 73: “According to the records and monuments, Rev. John Eliot, Jr., and his first wife, Sarah Willett, (daughter of Captain Thomas Willett, of Plymouth 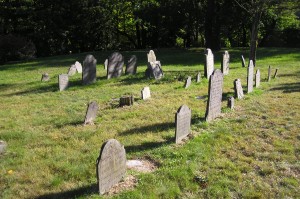 Part of Fuller Section in the East Burying Ground

Colony, and first Mayor of New York,) were probably the first persons buried here; one in June, 1665, and the other in October, 1668…….”. “In September, 1852, a marble monument was erected near the center of the first acre of land, given by John Jackson, Senior, upon the spot where the first Meetinghouse was erected, in 1660. Upon one side of the monument the names of the earliest settlers of the town are inscribed, with the date of their settlement, time of their decease, and their ages; upon the other sides of the monument are inscriptions to the memory of the first Minister, the first ruling Elder, and the donors of the burying place. It was erected by forty-three of the descendants of those whose settlement and memory it commemorates.”

(1) Francis Jackson, History of the Early Settlement of Newton, County of Middlesex, Massachusetts: From 1639 to 1800 – with a Genealogical of its Inhabitants prior to 1800, “of Boston, a Native of Newton”, Boston: Printed by Stacy and Richardson, 1854.