Colonists galvanized around the position that the Stamp Act of 1765, imposed by Parliament of Great Britain, was unconstitutional. The British Parliament insisted it had the right to tax the colonists. The colonists claimed that they were British subjects and as such taxation without representation was illegal. The American colonists formed a unifying Continental Congress and a shadow government in each colony, though ostensibly claiming loyalty to the monarch and a place in the British Empire.

The American boycott of direct taxes on British tea led to the Boston Tea Party in 1773. London responded by ending self-government of the Colony of Massachusetts Bay and put it under the control of the British army with General Thomas Gage as governor. In April 1775 Gage learned that weapons were being gathered in Concord, and he sent British troops to seize and destroy them. Local militia, known as ‘minutemen,’ confronted the troops and exchanged fire in the Battles of Lexington and Concord.

After repeated pleas to the British monarchy for intervention with the British Parliament, any chance of a compromise ended when the members of the New Continental Congress were declared traitors by Royal Decree, and they responded with a declared independence forming a new Sovereign Nation external from the British Empire; 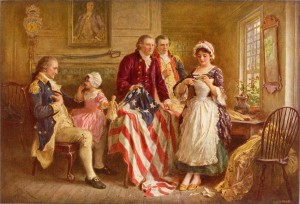 They were first united first under the Articles of Confederation and then from 1789, the United States of America Constitution.

Betsy Ross is credited with making the first American Flag.