A short History of the Church in Newton

The following dates and associated comments were extracted from the Francis Jackson 1854 book, History of the Early Settlement of Newton, County of Middlesex, Massachusetts: From 1639 to 1800. 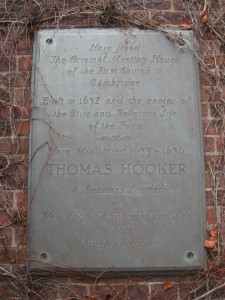 Hooker’s company, who landed in Boston, in 1632 and who had attended his ministry in England. Upon their settlement here, they sent [for] him in Holland, whither he had fled from persecution, entreating him to become their Pastor again. He consented, and came over in 1633 and took his abode among them.  He was one of the most celebrated and influential of the emigrant Puritan clergy. Samuel Stone, also, a man of eminence in his day, and Thomas Hooker, were ordained, the one as Teacher, and the other as Pastor of the Church, in October, 1633.

1636, The members of this first Church, with its Pastor [Hooker] and Teacher [Stone], removed to Hartford, Connecticut.

1654 – During the ministry of Mitchell, the first settlers of Cambridge Village, in the latter part of the year 1654, or the beginning of 1655, petitioned the Cambridge Church to be released from paying rates to them, on the ground that they were about to establish the ordinances of Christ among themselves, and distinct from the [Cambridge]Town. [This was rejected]

1656, The inhabitants of Cambridge Village had become so numerous, by the year 1656, as to form a distinct congregation for public worship, ….. As their petition to the Church found no favor, they tried the General Court next.

1654, The first settlers of the village [current day Newton] began very early to manifest a strong desire to be independent of Cambridge; they gently commenced the first movement in that direction, in 1654; about which time they began to hold religious meetings for public worship, in the village, when they asked to be released from supporting the church at Cambridge.

1656, John Jackson and Thomas Wiswall, in behalf of the inhabitants of the village, petitioned the General Court to be released from paying rates for the support of the ministry at Cambridge church. [this was rejected by Cambridge]

1661, The inhabitants of the village petitioned the Court again, to be released from paying church rates to Cambridge. The erection of a new Meeting-house in the village had greatly strengthened their case, and accordingly the Court granted them freedom from all church rates for the support of the ministry in Cambridge, and for all lands and estates which were more than four miles from Cambridge Meeting-house; the measure to be in the usual paths that may be ordinarily passed.

1662, The inhabitants of the village were not, however, satisfied with the dividing line, and in 1662, they petitioned the Court for a new line. The action of the Court upon this petition was to set an official boundary line between Cambridge and Cambridge village; [which is the same boundary that exists today].

1660, The first Meeting-house in Cambridge Village, was erected in the old burial place, in 1660. Where the meetings for public worship were held during the preceding four or five years, is not known; there was a hall in Edward Jackson’s house, which stood near the present dividing line between Newton and Brighton, and their meetings may have been held there. 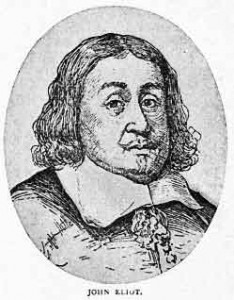 1662, The residence of Cambridge Village won the right to have their own church.

1664, John Eliot, Jr. (First Minister) took his degree in 1656, and began to preach about 1658. It is probable that he supplied the pulpit of the new Meeting-house, in the Village, much of the time previous to his
ordination, which took place on the 20th of July, 1664. “The Elders and Messengers of the Churches of Dorchester and Roxbury, including Rev. Richard Mather and Rev. John Eliot, were present, and probably others, and the first Church was organized on the same day. At the same time, and agreeable to the custom of that early period, Thomas Wiswall, lately a member of the Dorchester Church, was ordained Ruling Elder, or assistant to the Pastor, in inspecting and disciplining the flock.”

The following persons, with their wives, were probably the first members of the Church at its organization. 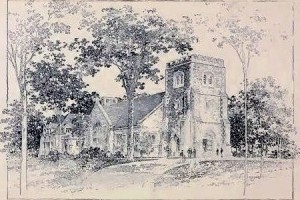 The Newton Church records, and the Rev. Mr. Merriam’s house, were all burnt, in 1770. The Roxbury and Dorchester Church records confirm these facts, and also that Thomas Wiswall was dismissed from the Dorchester Church, 5. 4. 1664, for the beginning of a Church at Cambridge Village, where Mr. John Eliot doth preach. Also, ll. 7. 1664, was dismissed the wife of Thomas Wiswall, the wife of Goodman Kinwright, and Margaret, the wife of James Trowbridge, to the Church gathered at Cambridge Village. 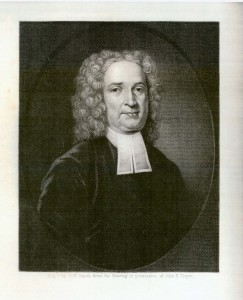 John Cotton, one of the first Minister in Boston

1668,  The Rev. Mr. Eliot died October 13, 1668, about four years and two months after his ordination. More than six years elapsed before a successor was ordained; in the mean time divisions sprang up among the congregation.
1674,  On the 23d of December, 1674, the Rev. Nehemiah Hobart, the fifth son of Rev. Peter Hobart, of Hingham, was ordained Pastor of the Church at Cambridge Village.

1740,  Rev. George Whitefield [Church of England] preached in Newton, in November, 1740, to a crowded audience. His religious tenets divided the community; almost every man was either an ardent advocate, or a decided opponent. The consequence of this state of things was division and contention in all the Churches, and many years elapsed before the storm became a calm. [No Fuller names appear on his convert list]

1757, Rev. John Cotton died, May 17, 1757, in the sixty-fourth year of his age, and the forty-third of his ministry, having preached in Newton forty-two years, six months, and fourteen days.

1757, The Church having made choice of Jonas Meriam to be their Minister, a Town meeting was held, December 9th, and agreed with the Church. 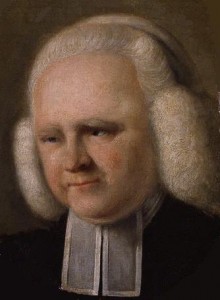 1770, Rev. Meriam’s dwelling house was burnt, March 18, 1770 and the Church records were also burnt. [A committee reconstructed the records]

1778, The Town was divided into two Parishes, East and West. The Act of the General Court, to establish the “West Parish”, was passed in October, 1778. ” The inhabitants on either side of the line, may choose to belong to either Parish, provided they make their election, and give in their names to the office of the Secretary of State, within six months after the passage of this Act.”  December 14, 1778. First Parish meeting of the first precinct [East] in Newton; Abraham Fuller, Esq., Moderator, Captain John Woodward was chosen Clerk and Treasurer, and held those offices, by annual choice, until March, 1795, when his son Ebenezer succeeded him in those offices.

1764, The erection of a Meeting-house was commenced in 1764 – prior to this date, the inhabitants of the westerly part of town began to obtain the occasional preaching in their neighborhood. 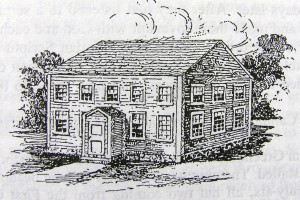 1779, The proprietors of the Meetin-house chose Alexander Shepard Jr., Joseph Hyde, and Phineas Bond to give a title to the pews of the Meeting-house.

1779, The first book, wherein to record the doings of the [West] Parish, was the gift of William Hoogs.

1781, William Greenough, having been chosen by a unanimous vote, was 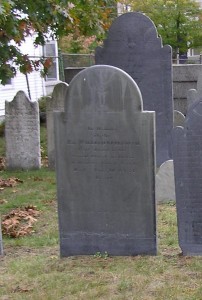 ordained Pastor of the first Church in the West Parish of Newton November 8, 1781. Lyman Gilbert, from Middlebury, Vermont, was chosen Colleague Pastor, with Mr. Greenough.

1812, The meeting-house was enlarged and an alteration in 1831 gave it a different look.

1831, Rev. Mr. Greenongh died November 10, 1831, aged seventy-five, having been Pastor of the first Church in the West Parish fifty years.

1848, A beautiful new Church was built with a graceful spire on Washington Street.

1.   175 Yr. Anniversary Church Committee, The Story of the Second Church of Newton, From a Colonial Meetinghouse to a Suburban Church, Newton Massachusetts, Published, Newton, Oct 21, 1956  (some  dates differ from Jackson’s dates).

“THE YEAR was 1781, the day was the twenty-first of Oct, and the place was the new West Parish of Newton. The fires of Joseph Ward’s blacksmith shop, which adjoined Judge Fuller’s farm, had been banked and the homespun cloth of Joshua Jackson’s cutting table had been laid aside. From the Lower Falls to Watertown, men and women left their homes and quiet fields and made their way on foot or on horseback to the meetinghouse.

There, twelve men, symbolic perhaps of the twelve disciples, and their 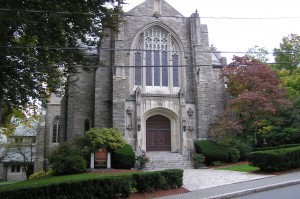 young pastor-elect covenanted together to form the Church of Christ. With their strong Puritan faith they must have felt that founding this church was ‘God’s good pleasure.’ But no man among them could have envisioned that generations hence a great congregation would gather to commemorate that day……..”