Lavenham[1]  is a village, civic parish and electoral ward in the Babergh district, in the county of Suffolk, England. It is noted for its Guildhall, Little Hall, 15th century church, half-timbered medieval cottages and circular walks. In the medieval period it was among the twenty wealthiest settlements in England. Today, it is a popular day-trip destination for people from across the country along with another historic wool town in the area, Long Medford. Lavenham History .. see Note 1. 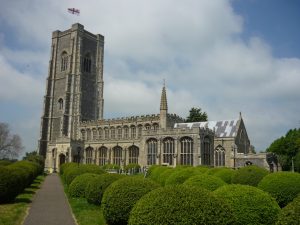 First, his wife Elizabeth Cole, was born in Lavenham and baptized in the Parish Church on 1 Jan 1622/3. We know the Cole family lived in the town as we have the baptism records for all the children as well as the burial record for her father, Walter and mother Susanna (Northfield) which indicate they were buried in the churchyard of St Peter and St Paul Parish Church in Lavenham. Baptism Record

Secondly, John of Newton fits into the family of James Fuller, who lived in Lavenham and died there in 1622 and was likely John’s grandfather. We know that James had a son ‘John’ b. 1563 in Lavenham who married Anne Gates born 5 April 1573 in Lavenham. An analysis of James’ Will shows the likely link. Who is James Fuller. 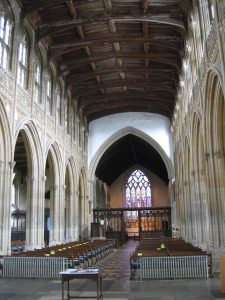 Thirdly, John of Newton emigrated from Lavenham Parish to Cambridge, Massachusetts (no date given) according to Charles Edward Banks.[3]

Fourthly, There is an interesting sketch of Frances, the mother of Simon Onge in the NEHGS’s Great Migration 1620-1633, page 1360, which describes her family from Lavenham and their circumstances. Simon’s father, Edmond Onge, was a witness to the Will of James Fuller. It is logical that John Fuller of Newton settled in Newton, Massachusetts as not only was the Onge family from Lavenham, but also the Hammond family, who settled in Watertown and Newton as well as Justinian Holden who likely married one of the Onge daughters, all from Lavenham. There is a Hammond Street in Newton, named after Thomas Hammond who was also from Lavenham. John of Newton obviously knew Simon Onge, who was born in Lavenham, when John gave Simon some 20 acres to live on during his life.  Who was Simon Onge.

Domesday Book[2]  Lavenham was a settlement in Domesday Book, in the hundred of Babergh and the county of Suffolk.

It had a recorded population of 66 households in 1086, putting it in the largest 20% of settlements recorded in Domesday, and is listed under 3 owners[2] in Domesday Book. 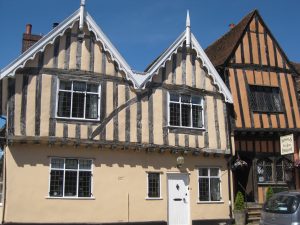 Before the Norman conquest, the manor of Lavenham had been held by the thegn Ulwin or Wulwne. In 1086 the estate was in the possession of Aubrey de Vere I, ancestor of the Earls of Oxford. He had already a vineyard planted there. The Vere family continued to hold the estate until 1604, when it was sold to Sir Thomas Skinner.

Lavenham prospered from the wool trade in the 15th and 16th century, with the town’s blue broadcloth being an export of note. By the late 15th century, the town was among the richest in the British Isles, paying more in taxation than considerably larger towns such as York and Lincoln. Several merchant families emerged, the most successful of which was the Spring family.

The town’s prosperity at this time can be seen in the lavishly constructed wool church of St Peter and St Paul, which stands on a hill top at the end of the main high street. The church, completed in 1525, is excessively large for the size of the village and with a tower standing 141 ft (43 m) high it lays claim to being the highest village church tower in Britain. Other buildings also demonstrate the town’s medieval wealth; the Lavenham Wool Hall was completed in 1464. 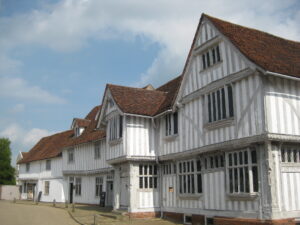 The Guildhall of the catholic guild of Corpus Christi was built in 1529 and stands in the centre of the village overlooking the market square. When visiting the town in 1487, Henry VII fined several Lavenham families for displaying too much wealth. However, during the 16th century Lavenham’s industry was badly affected by Dutch refugees who settled in Colchester, who produced cloth that was cheaper and lighter than Lavenham’s, and also was more fashionable.   Cheaper imports from Europe also aided the settlement’s decline, and by 1600 it had lost its reputation as a major trading town. This sudden and dramatic change to the town’s fortune is the principal reason that so many medieval and Tudor buildings remained unmodified in Lavenham, as subsequent generations of citizens did not have the wealth required to rebuild in the latest styles.

Like most of East Anglia, Lavenham was staunchly Parliamentarian throughout the Civil Wars of the 1640s. Most local landowners, such as Sir Nathaniel Barnardiston, Sir Philip Parker and Sir William Spring, were strong advocates of the Parliamentarian cause. There is no record of the town ever being directly involved in the conflict, although the townspeople did provide a troop of soldiers to aid in Parliament’s Siege of Colchester in 1648. A grammar school opened in the town in 1647. The settlement was struck by plague in 1666 and 1699. Small pox struck in 1712 and 1713, killing over one in six of Lavenham’s residents.

In the late 18th century, the village was home to poet Jane Taylor, and it may have been while living in Shilling Street that she wrote the poem The Star, from which the lyrics for the nursery rhyme Twinkle Twinkle Little Star are taken. Colchester and Ongar, both in Essex, also have claims to be the site of composition of the poem.

Like many East Anglian settlements, Lavenham was home to an airbase in the Second World War II – Air Force Station Lavenham, an American Air Force airfield. USAAF Station 137 was manned by the US Army Air Force 487th Bombardment Group between 1944 and 1945. The airfield, actually located a few miles away in Alpheton, has since been returned to arable farmland, though some evidence of its structures and buildings remains, including the control tower.

In the 1960s, a new area of council housing was built in the north of the village, centred on Spring Street, S 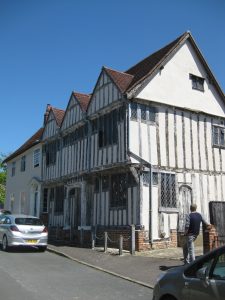 pring Close and Spring Lane. In 1980 the marijuana smuggler Howard Marks was arrested in the bar of the Swan Hotel. 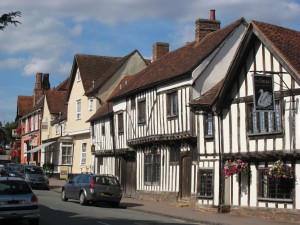 Banks listed the following emigrants from Lavenham Parish who immigrated to New England: 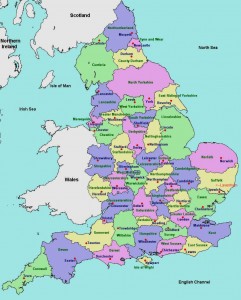