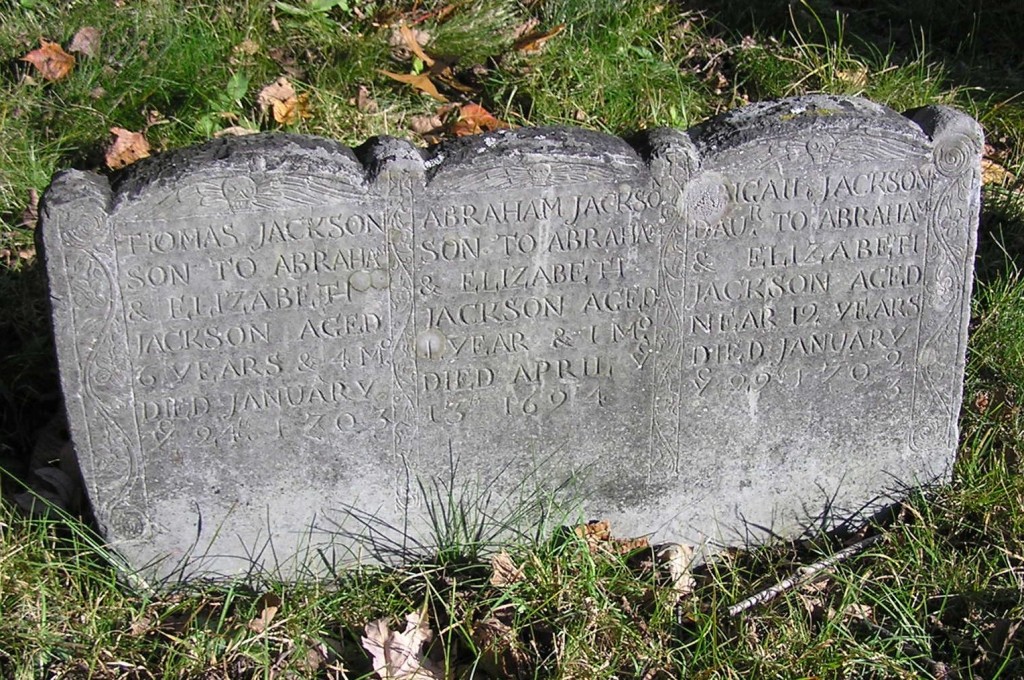 The History of this cemetery as quoted from the 1854 Jackson Book:

Francis Jackson, History of the Early Settlement of Newton, County of Middlesex, Massachusetts: From 1639 to 1800 – with a Genealogical of its Inhabitants prior to 1800, “of Boston, a Native of Newton”, Boston: Printed by Stacy and Richardson, 1854.

Page 71,
“About the time of the setting up of the first Meeting-house, (1660,) Deacon John Jackson gave one acre of land for the place for the house to stand on, and for a burying place; and May 14, 1701, Abraham Jackson (son of Deacon John) added and gave, for the setting of the school house upon, the enlarging of the burying place,…..”

Page 73,
“From the language of the settlement, we infer that the place was not fenced in until after 1765. After it was fenced, the Sexton pastured his cattle therein, until about the year 1800; and from this practice, doubtless, some of the grave-stones have been displaced or broken by the cattle, and lost.”

“According to the records and monuments, Rev. John Eliot, Jr., and his first wife, Sarah Willett, (daughter of Captain Thomas Willett, of Plymouth Colony, and first Mayor of New York,) were probably the first persons buried here; one in June, 1665, and the other in October, 1668. Richard Parke died in the Village in 1665; it is uncertain whether he was buried here, or at Old Cambridge, where he formerly lived.”

“About 1802, the proprietors of the brick tombs on the north-west side, purchased a strip of land one rod wide, adding thereto about nineteen rods, with a view of continuing the tombs across that side of the burying place.”

“In April, 1834, the town purchased of Charles Brackett, one acre of land, adjoining the north-east side of the burying place; the whole contents are now three acres, less seven rods.”

“In September, 1852, a marble monument [First Settlers Monument] was erected near the centre of the first acre of land, given by John Jackson, Senior, upon the spot where the first Meeting house was erected, in 1660. Upon one side of the monument the names of the earliest settlers of the town are inscribed, with the date of their settlement, time of their decease, and their ages; upon the other sides of the monument are inscriptions to the memory of the first Minister, the first ruling Elder, and the donors of the burying place. It was erected by forty-three of the descendants of those whose settlement and memory it commemorates.”

“At its foundation were deposited some historical facts, in a printed pamphlet, sufficient to illustrate three historical\epochs of the town, namely: its first settlement, in 1639; the ordination of its first Minister, in 1664; its separation fromCambridge, and organization as an independent town, in 1679.”