Marriage License Dated January 29, 1609 – Issued by the Church of England 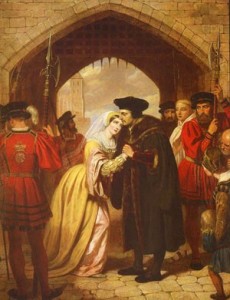 Marriage licenses originated in England in the 1500s and were originally a shortcut that simplified the marriage formality, as well as a revenue source for the church. Rather than arranging to have banns read (marriages announced) in one or more parishes for three weeks prior to the wedding, a couple went to church officers and paid for a license to be issued. The license required a statement that the couple knew of no reason why their wedding should not take place. As security that their statements were true, the couple was required to post a bond that would be forfeit if their statements were false. Signatures of bond guarantors were required.

Transcription of the Original Document in Latin 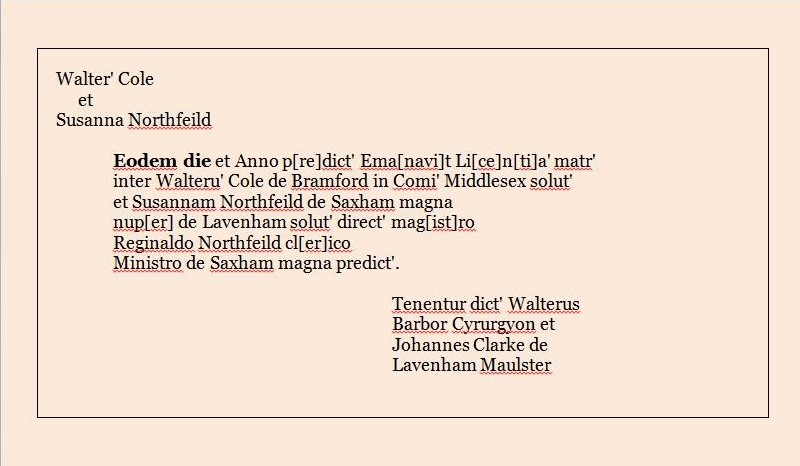 Translation of the Original Document in Latin 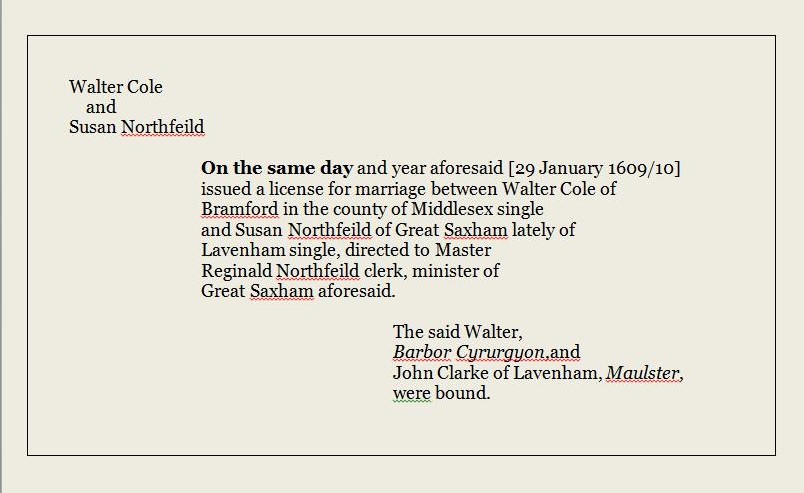 Eodem die et anno, on the same day and year aforesaid; reference is to the previous document which was dated January 29, (XXIX die mensis Januarii), 1609.

Bramford, is a town Suffolk County; there is no Bramford in County Middlesex, England. There are two possible options: 1. Brentford in Middlesex, but unfortunately the early Brentford Baptisms have not survived. 2. Bramford in Suffolk County which is listed in the DomesDay book under the hundred of Bosmere, with 94 households [opendomesday.org]. We did not find early Cole families in Bramford, but we did find early Cole families in Lavenham, but no Walter or Randall/Randulphe [familysearch.org]. 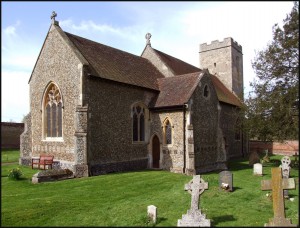 Barbor Cyrurgyon, (Barber Chirurgeon) or Barber Surgeon was a profession and the most common medical practitioners of Medieval Europe at the time. Surgery was normally conducted by barbers.

Maulster, is the occupation of Maltster today.

Were Bound, Bond Guarantors were required on Marriage Licenses of the day, as seen in the description of Marriage Licenses above. It is interesting to note that the occupations of the Bondsmen were written in English in the Original Document. Therefore, the translation has left them as written, but in italics.

Great Saxham Church, St. Andrew pictured here. “The Church (St. Andrew), an ancient structure in the park, consists of a nave, chancel, and tower containing three bells. It was restored in 1869, when the roof was tiled, the tower opened to the nave, an organ chapel added, the ancient waggon roof, which was hidden by the ceiling, exposed, and a valuable organ supplied. The parsonage is an ancient thatched building, erected about the end of the 15th century.”1

This framed listing of Rectors hangs on the wall in the Great Saxham Church and shows that Regin[ald] Northfield was the Rector in this church between 1571 and 1645. His name is on the marriage license of 1609 as clerk and minister issuing the license, therefore we can assume that he married Susanna Northfield (may be a relative) and Walter Cole. We wonder if it was the Rector himself who made the marriage entry of 30 January 1609.