[Note: the following is an extract of the land dispute section of a 2005 publication by Roger Thompson1 with my headings added and documents plus transcriptions inserted, W L Fuller]

Simon Onge died intestate in the autumn of 1678. An inventory of his estate was taken on 8 November 1678. It totaled 86 pounds of which 70 was made up of his house and adjacent homelot, barn and small farm of twenty-two acres. The inventory was sworn in court on 17 Dec 1678 and brother Jacob was granted administration. By Feb, Fuller had raised objections and on 9 June 1679 formally sued Jacob for 50 pounds damages for withholding upland and meadow belonging to Fuller and cutting and carrying off wood. The case was heard on 17 June.2

Two of Fuller’s sons, who stood to benefit from recovering the land, argued that the twenty acres was within the bounds of their father’s property and the deeds prove that it is his. They had “never heard their father say that he had sold [it] to Simon Onge, but only that he had let Simon have a farther tract of upland and meadow to improve for the time of Simon’s life, then the land was to return to our father.”  According to them this was a mutually beneficial arrangement whereby a poor man could support himself and a rich man could get some of his land brought into cultivation.3

The Onge clan mobilized witnesses to prove that Fuller had sold the land to Simon and that he had paid for it in full. In the forefront of this defense where the Holden family.  Justinian, 66 deposed twice. He recalled the sale more than twenty years before because he “had paid Simon Onge a pair of oxen which he paid John Fuller at £16 price towards payment for the land. Simon enjoyed and improved the land without let or hindrance from Fuller. The land cost 20 shillings the acres.”  His nephew John Holden added that the remaining cost had been made up with a bull. The Holdens were supported by Fuller’s South Side neighbors, the Parks. Thomas Parke corroborated Justinian’s evidence that Fuller had asked less for the land on condition that if it were ever resold he could buy it back for the same price. Parke’s brother-in-law, Richard Barnes remembered meeting Fuller  “on the road who asked if he would buy an land of him [Barnes] replied that he could not resolve him [there and then] but would look upon it. Fuller and his wife said that they had sold Simon Onge some land. There was no deed on it but it was not necessary. He has paid honestly.” Barnes asked them why they were willing to sell “such a corner of land?  Fuller replied because he wanted pay to lay down presently for purchasing of the farm.” Coming from such solid citizens with such specific detail, this was persuasive testimony.4

The Jury was in a quandary and entered a special verdict.
“If purchasing, paying for and possessing and improving lands for more than 20 years without a deed in writing will give legal title, for the defendant [Onge].  Otherwise for the Plaintiff.” The bench resolved in the negative; [meaning] for Fuller. 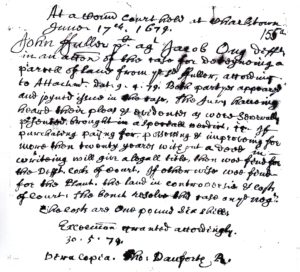 Transcription: At a Coun[ty] Court held at Charlstown June 17th 1679 John Fuller pl[aintiff]   ag[ains] t Jacob Ong deff[endant] in an acc[i]on of the case for deteyneing a parcell of land from the s[ai]d Fuller, according to Attachm[en] t dat[ed] 9.4.79.  Both partyes appeared and joyned issue in the case, the Jury having heard their pleas & evidences as were Severally pr[e]sented, brought in a speciall verdict, i.e. If purchasing pay[i]ng for possessing & improveing for more then twenty yeares without a deed in writeing will give a legall title, then wee find for the Deff[endan]t costs of Court.  If other wise wee find for the Plant[iff] the land in controversie & costs of Court: the bench resolve this case on the neg[a]t[ive] [for Fuller]. The costs are One pound Six shill[ings]             Exceccuc[i]on granted accordingly   30.5.79

To highly literate magistrates, the deed, the written proof, was all-important. They preferred the letter of the law, though the wording of the jury’s verdict suggested that their sympathies lay with Onge. Instead of inheriting £86, it looked as though Jacob, “the right heir” would be left with £36, including an old mare, a little horse cart, four old books, old furniture, pots and pans, a soldier’s arms and “snapsack.” And a little malt- bought no doubt from John Fuller.5 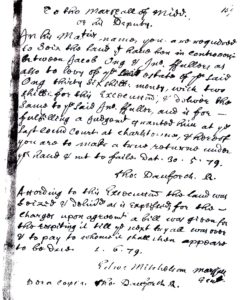 In his Ma[jes]ties name, you are required to Seiz the land th[a]t have been in controversy between Jacob Ong & Jo[h]n Fuller, as also to levy of the estate of the said Ong thirty six shill[ings] money, wich two shill[ings] for this Excecucc[i]on, & deliver the Same to the Said Jo[h]n Fuller, and is for fulfilling a Judgem[en]t granted him at the last  Coun[ty] Court at Charlstowne, & hereof you are to make a true returne under yo[u]r hand & not to faile. Dat[ed] 30.5.79

According to this Excecucc[i]on the land was Seized & deliv[ere]d as is expressed; for the charges upon agreem[en]t a bill was given for the respiting it till the next tryall was over & to pay to whome it shall then appeare to be due  2.6.79

The successful gathered of clan and neighbors around the embattled Jacob Onge shows the continued importance of extended family and “good neighbourhood” or communal support. There were few such witnesses for the Fullers, but then, they had the vital deed of ownership. It is tempting to see this case as a dispute between two worlds: an older world where memory, face-to face agreements sealed by a handshake, and communally sanctioned mutual trust confronting a newer bureaucratic mindset, where formally written, signed (or marked) and witnessed legal documents, copied into registers of deeds, were the only acceptable proofs of ownership; Winthrop’s communitarian “Model of Christian Charity” worsted by commercial contractualism. Jacob Onge acknowledged his petition (scrivener-written) with a very crude mark. Depositions in Onge’s favor were penned in crude, ill-formed handwriting; Fuller’s were neatly scribal. If indeed Simon Onge had been somehow mentally disadvantaged, as suggested, the case for exploitation by his wealthy neighbor looks even stronger. However, it is worth remembering the richer Holden clan hovering in the background. Justinian always made certain that his large acquisitions were properly documented and filed. In his own dealings he wisely refused to rely on malleable memory.6

The closeness of the verdict and a sense of injustice impelled Jacob and Holdens to seek more evidence and fresh witnesses. On 17 October 1679 Onge petitioned the General Court. He now claimed that “John Fuller living near to [Simon] at the time of his decease did take into his hands the chest and writings belonging to [the dead man].” When Jacob, armed with his letters of administration “called the same chest, goods and papers out of Fuller’s hands … he could not find the deed of the land … and apprehended Fuller had taken [it] away.” The deputies were sympathetic and persuaded the upper house to hear the case. New evidence was sworn by Simon’s former neighbors: John Knapp, 55, deposed that Simon “would always say he was well enough [safeguarded] for that land he bought, for … I have a writing from John Fuller.” John Bacon, 27, testified that “Jacob Onge demanding the key of Simon Onge’s chest, Goodman Fuller denied to give it him.” Appraisers Henry Spring, 50, and William Bond, 53, reported that Fuller had admitted selling Simon the land, but denied having any deed. Fuller had brought the key to Onge’s chest when the estate was being valued in November 1678. Richard Child, 47, remembered asking the sinking Simon “whether Fuller ought to have back the land after his death. Simon replied that Fuller had no more to do with the land than Child had.”7

From the opposing camp we hear at last from John Fuller himself. He adamantly denied that any sale had taken place. The nurse during Simon’s last seven years quoted his as saying. “What have I to make a will of? You perceive Goodman Fuller intends to have his land again.” At the appraisal, she “did not perceive the least thing missing” from the chest, which she had packed.8 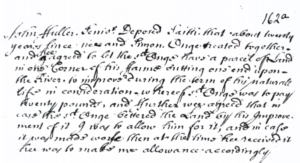 Transcription: John Fuller Senior Deposed. Saith that about twenty years since he and Simon Onge seated together and he agreed to let the said Onge have a parcel of Land in one corner of his Farm putting one end upon the River, to improve during the term of his natural life in consideration whereof said Onge was to pay twenty pounds, and further was agreed that in case the said Onge bettered the Land by his inprovment of it I was to allow him for it, and in case it was made work then at the time he received it he was to make an allowance accordingly. End

The General Court reversed the Middlesex judgement. They decreed that Jacob Onge should have the lands in dispute unless John Fuller paid him £60 within two months. Fuller must also stump up the large cost of £11.12.6.

Transcription: In the case between Jacob Ong & John Fuller, this Court doth order and decree, that the said Jacob Ong shall have & enjoy the lands in controversy to hem & his heires for ever, unless the said Fuller doe, within two moneths, pay unto said Jacob Ing, or his order, sixty pounds, forty pounds whereof to be in current money of New England, & twenty pounds in corne & catle

[Note: as search of deeds at the County Land Office did not find a deed for these 22 acres, so it is assumed that John Fuller paid the 60 pounds plus Court Costs.]

They were probably persuaded by a gloss on the law about possession issued on 15 May 1672. This affirmed that long-term occupation of land even without written evidence of purchase could be taken to prove ownership.

1672 May 15, Law regarding possession of land Transcribed

the confirmation of land to the possessor where the grant of the said land was to another person & ye possessor nothing to show for the alienation therof but his possession, according to that lawe. The Court resolves this in the affirmative. End

Did the Fuller vs Onge Trials Lead to a Clarification of the Lawxi. 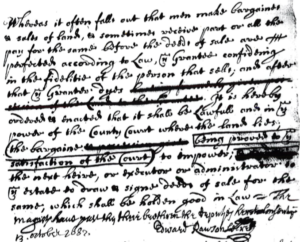 The law was clarified in 1682. The hotly disputed Fuller-One case probably prompted this move.9

Transcription:xii. Whereas it often falls out that men make bargaines and sales of land. And some time receive part or all the pay for the same before the deeds of sale are perfected according to the law, the grantee confiding in the fidelity of the person that sells, and after that the grantor dies,

It is hereby ordered and enacted, that it shall be lawfull and in the power of the County Court where the land lies (the bargaine being legally proven to the satisfaction of the Court) to impower the next

heire, or executor, or administrator to the estate to draw or signe deeds of sale for the same. End

Notes for the original article by Mr. Thompson:

Notes for the inserted documents and transcriptions: