The following research notes and family tree were located in the ‘Fuller Family Papers 1729-1950’ file in the archives of the Jackson Homestead and Museum located at 527 Washington St, Newton, MA, USA. The research is unsigned and undated, however there is a date of 1899 imbedded in page 4 of the narrative blow. The author/researcher was likely a descendent of Judge Abraham Fuller as the research ends with much information about the Judge and the tree begins with his great grandfather, John Fuller of Newton.

The research was transcribed as written with no cross reference with Vital Records, History Books, etc. However, we found the information to be accurate and consistent with our understanding of dates, people, relationships and situations, except as noted 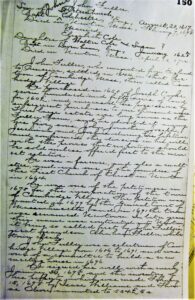 John Fuller, who emigrated from England to America, settled in 1644 in that portion of Cambridge, Mass, then called Cambridge Village.

He purchased in 1658 of Joseph Cooke seven hundred and fifty acres of land for 160 £ and increased his possessions by subsequent purchases to over a thousand acres. This large estate was long known as the Fuller Farm, and he divided it among is five sons, John, Jonathan, Joseph, Jeremiah and Joshua during his lifetime and confirmed the division in his will, with the proviso that no portion should be sold unless offered first to the nearest relative. 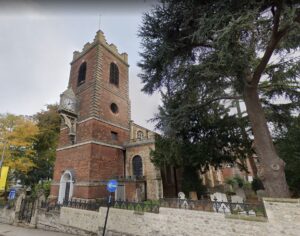 He was a farmer, and also a maltster, and was one of the founders of the First Church of Christ in Newton in 1664.

He was one of the petitioners in 1678 for the incorporation of the town on of Cambridge Village. The petition was granted in 1679 by the General Court of Massachusetts, and in 1691 the town was renamed Newtown. In later years this name was contracted into Newton, it being so called first by John Fuller’s great grandson Abraham Fuller, while town clerk.

John Fuller was a selectman of Cambridge Village from 1686 to 1691, and was one of a committee to build a new meeting house in 1696.

Transcribed from the Original Document

1. Our title is based on the content.
2. The original document from St Peter’s Church, Colchester, UK (ERO# D/P 178/1/1) as transcribed by Diana Spelman, Norwich, Norfolk, UK:    “Christnings [sic], 1617, John the sonne of John Fuller bapt’ Aug’ xxviij th. [28th].”  The usual convention was to show the last “i” in a roman numeral ending in an “i” with a long tail, which in this case has been transcribed as a “j”.  The descendants of John Fuller of Newton would have liked this record to read: ‘John Fuller the son of John Fuller, etc., who was born in 1562/3 in Lavenham, Suffolk, UK.’

Given the accuracy of the rest of information in the research material, we think this date should be considered credible. Perhaps the author had a family bible or other credible information passed down. Colchester is a logical place to find the Fuller family as several members of Elizabeth Cole’s family migrated to Colchester. John’s grandfather, James, named John Fuller of Colchester as the executor of his will.

Tracing of John Fuller’s autograph; signed June 22, 1676 on a petition to the General Court of Mass. [Image on original document]

John Fuller and his wife[6] are buried in the burying ground in Newton Centre, surrounded by the graves of four generations of their descendants. His gravestone only, reset in a granite base, is standing and inscribed

3. This area is blank; see the Actual Text section on page 3.
4. This is blank; we also have not found the marriage record to date.
5. The correct name is ‘The Parish Church of St Peter and St Paul, Lavenham, Suffolk, UK.’
6. The Vital Records for Newton show her death date, but neither those records nor the official interment list, show that she was buried in the East Parish Burying Ground in Newton.

Interior[7] of the Church of Sts. Peter and Paul, Lavenham, England. The name of his grandfather, James Fuller[8] is inscribed on one of the church bills. He was a warden of the church. The will of Walter Cole of Lavenham was signed Aug 13, 1652 and probated Sept 24. 1653. It says “my daughter Elizabeth, the now wife of John Fuller in New England.”

One of John Fuller’s descendants survived by will a silver spoon marked “E.C,” which has formerly belonged to his ancestor Elizabeth Cole.

8. Our research had concluded that James Fuller was the most likely grandfather of John Fuller of Newton. James Fuller did have a son, John b. 1562/3, which validates the St Peter’s Church record:   https://johnfullerofnewton.com/ancestral/about-john/ancestral-line/

9. This indicates the author/researcher has seen these church records because their wording follows the actual wording in each of the parish records. We know from the picture they were in the Lavenham church. 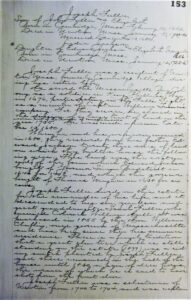 Joseph Fuller was a resident of Newton, Mass., formerly Cambridge Village during his entire life. He served the Massachusetts Bay Colony as a soldier in King Philipe’s War in 1676. Participating in the “Falls Fight” as a member of Captain William Turner’s company. For this service, he shared in the division of a large tract of land in the western part of the Province of Massachusetts year 1735. He was made a freeman, October 13, 1680.

When he and his wife were married in 1680, they received from her father, Edward Jackson, twenty-three acres of land on which they built a house the following year. This land was the western end of the farm which Edward Jackson bought of Governor Simon Bradstreet in 1646 for 140 £, and which the governor bought of Thomas Mayhew in 1638 for six cows.

Joseph Fuller lived on this estate for the remainder of his life, and it descended to his son, grandson and great granddaughter Sarah Fuller who married Colonel William Hull. It was purchased in 1855 by the Hon. William Claflin, once governor of Massachusetts and has been since then his summer residence. There is a family tradition that a great elm tree which is still standing on the estate (1899)[10] was a seedling switch planted by Joseph Fuller. And there remained in the hall of the house until 1830 a pair of deer horns, the wearer of which is said to have been shot from the front door.

Joseph Fuller was a selectman of Newton from 1700 to 1704, and was captain of the Horse Troop, and when he retired from the office in 1735, he gave to the town a training field for the use of the troop. It was discontinued in 1787, and the land revered to his heirs. 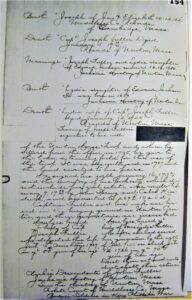 Tracing of Joseph Fuller’s signature to his will. [Image on original document]

Captain Fuller and his wife are buried in the burying ground in Newton Centre, and their gravestones are inscribed: 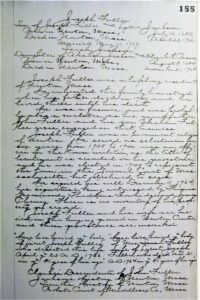 Joseph Fuller was a lifelong resident of Newton Mass. He inherited the family homestead when his father died in 1740, and he lived there until his death. He was a farmer, and was probably also a maltster, as his grandfather John Fuller and his son Abraham Fuller was engaged in that business.

Joseph Fuller was a prominent citizen of Newton. He served as selectman for six years from 1735 to 1740, was an officer in the town militia, as the title of lieutenant is recorded on his gravestone, and he was elected in 1749 to represent the town in the General Court of Massachusetts, but declined to serve.

He signed his will December 5, 1746, his signature being witnessed by Thomas Greenwood, Thaddeus Trowbridge and James Cheney. There is not inventory of his property on record. Joseph Fuller and his wife are buried in the burying ground in Newton Centre and their gravestones are inscribed: 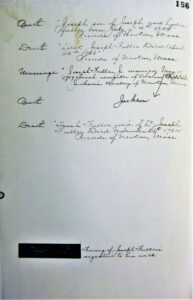 Tracing of Joseph Fuller’s signature to his will.  [Image on original document] 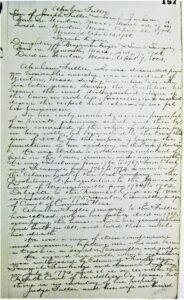 Abraham Fuller, who was descended from an honorable ancestry, was a resident of Newton, Mass. During his entire life. In his later years, during the Revolution, he became the most distinguished citizen of the town in civil life, possessing in a marked degree the respect and esteem of his fellow townsmen,

In his early manhood, he was principal of a private grammar school, and then became convinced of the value of education, for in his will, he bequeathed to the town the sum of 300 £ “for the purpose of laying the foundation of an academy in the town of Newton.”

He was elected to hold many important offices in the town, province, and commonwealth. He was Selectman for 1760 to 1767, Town Clerk and Treasurer from 1766 to 1792, a member of the “Alarm List” of the West Company in the Revolution Representative to the General Court of Massachusetts from 1764 to 1782, Delegate to the Provincial Congress of Massachusetts in 1775, Senator Councillor Judge of Court of Common Pleas. Abraham Fuller moved to the Fuller homestead when his father died in 1766, occupying the house which his grandfather had built in 1681, and lived there until his death.

He was a man of stern countenance and manner, befitting one who had been a teacher, a senator, councillor and judge. He signed his will, which signature was witnessed by Edmund Trowbridge, Samuel Trowbridge and Hannah Ruggles, on July 2, 1793, an it is on record in the Probate Court of Middlesex Co. Mass., but there is no inventory of his property.

Judge Fuller and his wife are buried in the Fuller – Hull tomb in the burying ground in Newton Centre and the horizontal slab above the tomb bears the inscriptions:[12] 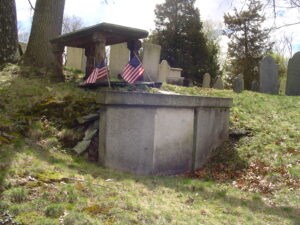 12. Judge Abraham Fuller’s body was placed in the Fuller-Hull Tomb in the East Parish Burying Ground, Newton, MA and it is our understanding the table was then added on the top of the Tomb to contain the inscription regarding his dates and message.

The Rev. Jonathan Homer D.D., pastor of the First Congregational Church of Newton, Mass., in recording the death of Judge Fuller, after eulogizing his character, related the following circumstance, which is a valuable contribution to the history of the Revolution. 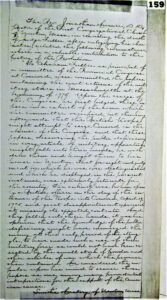 To Abraham Fuller as principal of the committee of the Provincial Congress at Concord, were committed the papers containing the exact returns of the military stores in Massachusetts at the beginning of 1775. Upon the access of the Congress, he first lodged these papers in a cabinet of the room which the committee occupied, but thinking afterwards that the British troops might attempt to siege Concord in the absence of the Congress, and that these papers, discovering the public deficiency in every article of the military apparatus, might fall into their hands, he withdrew them and brought them to his house in Newton. That foresight and judgment for which he was ever distinguished and which he displayed in the present instance, was extremely fortunate foe the country. The cabinet was broken open by a British officer on the day of the entrance of the troops into Concord, April 19, 1775 and great disappointment expressed at missing it expected contents. Had they fallen int their hands, it was his opinion that the knowledge of the public deficiency might have encouraged the enemy, at this early period of the struggle, to have made such a use of their military force as could not have been resisted by the small stock of powder and other articles of war which the province then contained. He considered the impulse upon his mind to secure those papers as one among many providential interpositions for the support of the American cause.