A Maltster is a person who performs the process of Malting. Malting is a simple process of soaking barley (malting barley) in water; spread it on the floor of a long room (Malt-House) for a few days, shovelling it along the floor turning as you go, until it begins to germinate.

The first step in germination is the conversion of starch to sugar, which happens within each grain of barley.

As it moves along the malting floor after a few days, it begins the second stage of germinating (sprouting).  Beer Brewers, who are the customers of this malt, do not want the sprouts because they are only interested in the sugar content in the grain which turns into alcohol when yeast is added. 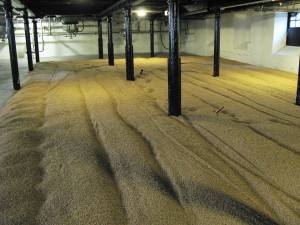 So, the germinated grain is roasted to stop further germination which preserves the sugar. The longer it is roasted the darker the malt. You need light malt for nice pale ale, and dark malt for a stout like Guinness.

Note: Smith in his 1880 History of Newton book reported that John Fuller of Newton was a Maltster, on page 89.