Some Information About John Fuller of Newton

Arrival in New England The first documented record of John and his family in New England is the birth record of their fourth child, son Joseph in Cambridge, Massachusetts on 10 February, 1652/3.[5] We know the family was in New England at least six months prior to that because Walter Cole’s Will, dated 13 Aug. 1652, contains a bequest “and also twenty shillings more unto my daughter Elizabeth, the nowe wife of John Fuller, in New England.” This date is much later than the 1644 arrival date recorded in most history of Newton books, and the 1644 date on the “First Settler’s Monument” standing the East Parish Burying Ground.

Fuller Farm
Francis Jackson[6] was the first of the history books to make reference to the “Fuller Farm” in his 1854 book. The nucleus of the farm was the purchase or 750 acres in 1658 and then by subsequent purchases he increased it to upward of 1000 acres. He distributed it among his five sons, through his will dated 1696.  In an agreement dated March 25, 1699/1700, these five sons divided the farm into five parcels of land based on their father’s will. This agreement was known as the “First Division”, gave access to their individual farmsteads. A second agreement dated May 13, 1730 between the residence at that time, set out roadways through the farm which tied into those in the town of Newton.

Ancestral Line
Our research has concluded that the most likely ancestral line[7] for John Fuller of Newton is back to his grandfather, James Fuller. If John was born in 1617, it would have been some 9 months before James Fuller wrote his last will May 21, 1618.

1678 Letter
On Dec 14, 1678 John Fuller of Newton wrote a letter to the Judge of the Probate Court and asked the Judge to please inform the Court that the 22 acres of land in the estate inventory of the late Simon Ong, was in fact his (John’s) land. Two court cases ensued (Fuller vs Ong and Ong vs Fuller) and the outcome was that John lost his appeal. It is likely that John knew Simon as they both were from Lavenham, Suffolk, England, a fact that did not seem to appear in the court transcripts. We also noted that Simon’s father, Edmond, was a witness to James Fuller’s will. More …

John Was An Elected Town Officer

[71]   1665. At a publ: meeting of the Inhabitants for choyce of Constables & select men &c there were elected for the yeare ensuing

Constables for the yeare ensueing. 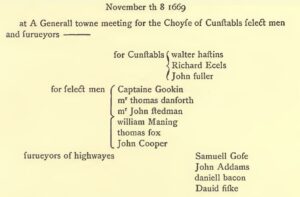 to looke after swine that they bee yooked and Ringed we are appointed for the towne: danill Cheaver and Common 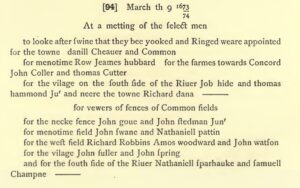 for menotime Row: Jeames hubbard
for the farmes towards Concord: John Coller and thomas Cutter
for the vilage on the south side of the River: Job hide and thomas hammond Jur and neere the towne Richard dana
for vewers of fences of Common fields:
for the necke fence: John goue and John stedman Junr
for menotime field: John swane and Nathaniell pattin
for the west field: Richard Robbins, Amos woodward and John watson
for the vilage:  John fuller and John spring
and for the south side of the River: Nathaniell sparhauke and samuell Champne 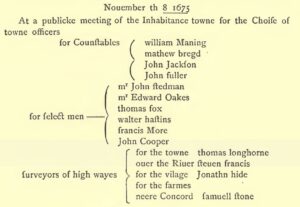 surveyors of high ways: for the towne: thomas longhorne; over the River: steven francis; for the vilage: Jonathn hide; for the farmes neere Concord: samuell stone.