The Name Fuller[1] is an old English occupational surname. Employed by woollen cloth manufacturers, a “fuller” scoured the cloth after weaving to render it whiter and more compact, thicker, and consequently more durable. As early as the 15th century, many fullers were in the south-eastern coastal counties of Suffolk and Norfolk. The original home of the fullers may have been in these counties where many woollen manufacturers were located. In these 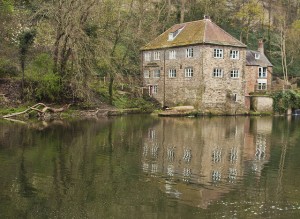 and other counties the trade of a fuller was of importance, as the quality of the finished cloth would be largely dependent on the expertness of these craftsmen.

The earliest method of processing included sprinkling the woven cloth with a clay known as “fullers’ earth.” The cloth was folded in a tub with water where the fuller would walk on it, presumably with his bare feet, until the object of fulling was accomplished. This part of the process was also the occupation of the “walker’ from whence the surname Walker was derived. In due time the early fashion of treading out the cloth became replaced by simple machinery called fulling mills. The introduction of machine methods met with resistance as is often the case when a change in established procedures tales place.

A complaint made to King Edward IV (1461-1483) began by saying “hats, caps, and bonnets hitherto made, wrought fulled, and thickened in the wonted manner, that is to say, with hands and feet,” and then proceeded to urge that the use of mills brought inferior articles into the market.

Reference to the fuller’s trade is made in an old story which illustrates the process of cloth making:

Cloth that cometh fro the wevyng

Is nought comely to wear

Til it be fulled under foot,

The “tasesles” mentioned were the common teasel, a rough prickly plant, similar to the thistle, which when dried was used for scratching the woollen cloth, and thereby raising the nap. In an old statute of Edward IV it was required “that every fuller … in his craft and occupation of fuller or tayseler of cloth, shall exercise and use taysels (teasels) and no cards which deceitfully impair the cloth.” 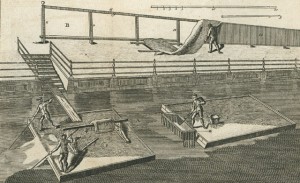 Y-touked presumably means tucked or stretched on a tenter frame previously to being dyed (teynted), after which the finished cloth is ready for the tailor.

The adoption of surnames in England beginning in the eleventh and twelfth centuries was the result of a growing necessity due to increasing population as well as expanding commerce and industry. It became increasingly impossible to maintain current identity of individuals unless each assumed a name which became his property. In the case of the fullers it was by adopting the name of the craft they followed, which gave them a fixed identity for life and was eventually passed on to their direct descendants. I will be seen, therefore, that all persons now bearing the occupational surname Fuller did not descend from on common ancestor of that name.

The introduction of parish registers in 1538 helped establish the idea of hereditary surnames. However, it was still common in some parts of the country to find a person entered under one surname at baptism, married under another name and then buried under a third.[2]