The Second Division of the Fuller Farm – 1730

The second division of the Fuller Farm area was the 1730 Agreement between the land owners at that time which included several of John’s sons. This agreement was the basis of the official open highway through the Farm area adopted by the town of Newton in 1751.

Francis Jackson[1] dedicated a section in his book to the location of Early Highways in Newton starting on page 37. At the bottom of page 42: “1751. A new way laid out through the ‘Fuller farm,’ beginning at the house of Josiah Fuller, at a rock in said Fuller’s fence, on the south side of the way, thence to Cornet John Fuller’s land, widow Hannah Fuller, Joshua Fuller, to land of Thomas Fuller, deceased, to Jonathan Fuller and over the brook called Cheese-cake brook, two rods wide, from said Josiah Fuller’s easterly to said brook. [Signed by the land holders.]”

Jackson’s reference to ‘signed by the land holders’ refers to the 1730 agreement  as “Extracts from Newton Records.[2]

Artickles of agreement mad[e] and concluded and fully agreed upon by JosephFuller, Jeremiah Fuller John Fuller Jonathan Fuller Isaac Fuller Jonathan Fuller Jun[io]r Thomas Fuller Isaac Fuller Jun[io]r Caleb Fuller Joshua Fuller all of Newton in the County of Middellsex in the [sic] of the Massachusets bay in New England and Joshua Fuller of Cambridge in the County afores[ai]d and do all and every one of us agree and concent to Lay out an open way two Rods[4] wide, as it is alowed of in the settlement of the Farm caled the Fuller Farm, for the use of and convenience of ye proprietors of said Farm: lying as it is now Laid out from the division of said farm down to the town way, at Solomon Park’s line, marked on a walnut tree & a heap of stones in Jonathan Fuller’s land: and then a walnut tree, and then a white oak, and then a peach tree, on land of Joseph Fuller, and then a white oak tree, on ye land of Jeremiah Fuller, and then to a white oak and then to a gray oak and then to a walnut tree and then over ye dam at ye upper end of the wet meadow, and then to a Rock, on ye land of Jonathan Fuller and then to ye  Town way for us; And also agreed to have liberty of passing through gates or bars from one proprietor’s way to the other where the way is now trod. And we do oblige our selves and our heirs to mend and maintain the said way for Ever from the corner of the line between John Fuller and Jonathan Fuller and down to the town way at Solomon Park’s line.[5][6]

“In witness whereof, we set our hands and seals, this thirteenth day of May, Anno Domini one thousand and seven hundred and thirty in the third year of the reign of our sovereign Lord George Second, of Great Britain, King, &c.[7]

The following is an extract from the Feb 4, 1750/1 Town Meeting Records which formally sets up a new public road through the Fuller Farm:[8] 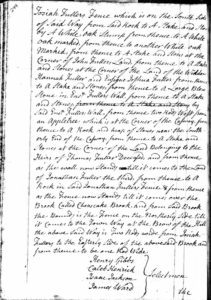 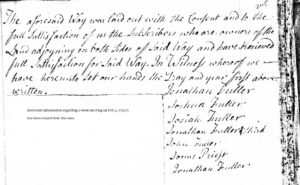 the Subscribers who are owners of the Land adjoining on both sides of the said Way and have received full satisfaction for said Way. In Witness whereof we have hereunto set our hands the Day and Year first above written.

1.     Francis Jackson, A History of the Early Settlement of Newton, county of Middlesex, From 1639 to 1800, with a Genealogical Register of its Inhabitants Prior to 1800. By Francis Jackson of Boston, a Native of Newton. Boston: Printed by Stacy and Richardson, 1854.

In witness whereof, we set our hands and seals, this thirteenth day of May, Anno Domini in the third year of the reign of our sovereign Lord George Second, of Great Britain, King, &c.

6.     This agreement was signed by ten descendants of John Fuller Sr. as well as three witnesses, all likely affected by the terms of this private agreement by the land owners as of 1730. In his Will of 1697/8, John Sr. gave each of his five sons a farmstead of about 200 acres and the Will stipulated that “…..and further my will is that my abovesaid sons shall not allinate [alienate – to transfer ownership] the above given and granted lands unto any stranger until first the next relation of the above said Fullers have the offer of it…….”. This may have led the family to treat the entire farm as a private family area longer than usual if each one had to sell to another Fuller family member before considering a ‘stranger’, which was John’s intent. We know the location of the farmsteads of each of the sons. When this agreement was signed in 1730, two of the sons had died, however from their Wills we can determine the names of the owners of those farmsteads in 1730. In his Will, John Sr. distributed his land to each of his sons:

2.     Jonathan died 1722 and in his Will left his farm to his nephew, Captain Jonathan Fuller, except his wife, Mindwell, was to live in one end of the house for as long as she lived (in fact she lived 36 years after her husband and died in 1758).